4th of July in Portland 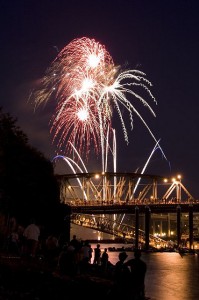 Portland may have you fooled as a city full of hipsters, but Oregonians love the 4th of July — and fireworks — just as much as any other red-blooded American state. So if you happen to be in Portland in July for Independence Day, here’s where to get your fireworks fix.

Waterfront Blues Festival
Oregon’s biggest fireworks show is on the first day of the Waterfront Blues Festival this year, at Tom McCall Waterfront Park along the Willamette River. The show starts at 10pm.
Price: $10 suggested donation, plus 2 cans of nonperishable food
Tip: You can see the fireworks from just about anywhere in close-in Portland: downtown, east side of the river, west side, and south waterfront.

Fort Vancouver
Technically not in Portland, Fort Vancouver, which is Portland’s closest National Park, across the Columbia River, is historically (nudge nudge) the biggest fireworks show in the Portland area. The holiday festivities begin in the morning, with the fireworks show starting at 10:05pm over Pearson Field.
Price: $5 advance, $7 at the gate (12 and under: free)
Tip: Fireworks can be seen from the Oregon side of the Columbia River too, so try Marine Drive.

Getting around:
If you want to avoid driving to check out the fireworks, TriMet usually adds extra MAX service on the 4th.