One of the best things about Portland is that there really is something for everyone. You can enjoy a long hike through the forest in the afternoon and be sipping cocktails at a swanky bar with just enough time between the two to change out of your hiking boots into your designer heels. Are you a city person who loves urban landscapes, excellent restaurants and eclectic shops? Are you someone who prefers to find the quiet parks and museums a city has to offer? Or are you hunting for the best local watering hole or sports venue? You’re in luck – Portland can satisfy all of those personalities, and more. 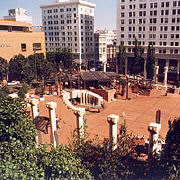 Portland’s city parks are plentiful and varied, from the grassy old-school variety with jungle gyms and baseball diamonds to the urban parks whose warm brick surfaces and seating are inviting to young and old alike. Portland is home to the largest urban park in the United States – Forest Park in the NW of the city – which is an excellent escape from concrete and steel and an extremely popular spot with hikers. On the other end of the scale, Pioneer Courthouse Square – known as Portland’s Living Room – is downtown Portland’s main square. It dips down from street level into an amphitheatre shape, making it the ideal space for festivals and concerts in the summertime. And these are just two of the many parks dotting Portland’s landscape.

As mentioned above, Forest Park is the biggest urban park in the U.S. at more than 5,000 acres. It’s very popular with Portlanders, especially those who live within walking distance of the park, as a place to enjoy the great outdoors after work and still be home in time for dinner. Forest Park welcomes hikers, runners, walkers, mountain bikers, dogs (on leashes) and kids of all ages to come and enjoy the almost 70 miles of trails and gravel roads.

Portland is home to countless microbreweries – some say there are more per capita in Portland than anywhere else in the world – and beer lovers always enjoy sampling the local varieties. Many of the local breweries have won national and international awards for their beers. Some are so local that you’ll only find them in one or two places in the city, while others are synonymous with Portland. Names like Bridgeport Brewing and Widmer are some of the bigger breweries to look for, but don’t be afraid to try some of the smaller producers like Lucky Lab and Laurelwood as well. When in doubt, trust your bartender.

Powell’s is a Portland institution, and if you’ve come to Portland with an empty suitcase just so you can fill it with books – you’re not alone. It’s the largest independent bookstore in the world selling new and used books, and covers an entire city block in NW Portland. This is, of course, not counting the branches of the store which run from suburbia to the airport. When was the last time you walked into a bookstore and needed a map? Well, in Powell’s you will – but if you’re even mildly entertained by books, you’ll happily spend hours in the mammoth store without a care in the world. Except maybe how you’re going to cart all those books home.

Oregon’s largest zoo sits atop a hill off of Highway 26 to the West of downtown. The zoo itself lies within the boundaries of Washington Park, which also includes several other sights. The Oregon Zoo has exhibits with animals from Africa, Asia and the Amazon, as well as an extensive list of Pacific Northwest-focused exhibits. Asian elephants have been a major highlight at the zoo since the early 1960s, when the first elephant born in the western hemisphere in more than 40 years was born at the Oregon Zoo. In addition to the obvious attraction of the animals, there are concerts in the summer and a little train which circles the zoo – really, it’s fun for the whole family.

The Oregon Museum of Science and Industry is known locally as OMSI (pronounced AHM-zee) and is educational and entertaining for kids of all ages. Many an Oregon schoolkid took field trips to OMSI, but that hasn’t dampened the enthusiasm we all have for this hands-on science class. There are hundreds of interactive activities throughout the museum, and because of its riverfront location there’s also a submarine permanently attached to the museum which you can tour. OMSI is also home IMAX and OMNIMAX theatres and hosts several temporary exhibits throughout the year.

The Portland Art Museum is located in downtown Portland and is the Pacific Northwest’s oldest art museum. Founded in 1892, it boasts a permanent collection of more than 35,000 pieces including work from Europe, Asia and Africa, as well as a substantial amount of Native American and Pacific Northwest art. There are several temporary exhibits throughout the year as well.

Portland might not have its own professional football or baseball team (a point of annoyance for some residents), but we do have a professional basketball team – the Portland Trailblazers. The Blazers play their home games in the Rose Garden in Portland’s Rose Quarter (this Rose Garden bears no resemblance to the actual garden of actual roses in Washington Park). The team’s old home arena – Memorial Coliseum – wasn’t torn down and sits right next door. Both venues are used for sporting events, concerts and shows throughout the year, and the area around them – known as the Rose Quarter – has a few restaurants and a couple of water fountains which are fun to play in when the weather’s hot.

A good river town doesn’t ignore its river, and Portland is a good river town. The Willamette River runs through the center of the city, and there are recreational attractions on both sides. On the West side, Governor Tom McCall Waterfront Park (known to locals simply as Waterfront Park) is a length of grassy lawns and fountains running along the river right next to downtown. It is land reclaimed from what was once a freeway, and Portlanders use it year-round for their own personal recreation as well as the many concerts and festivals which take place here. On the East side, the relatively recent addition of the Eastbank Esplanade has revitalized the opposite view of the river. It’s a long pedestrian and bicycle path running along the Willamette which is not only a great place for a walk but it has the added bonus of the downtown Portland skyline for a view.