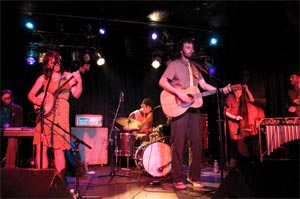 Starting in mid July, I started hearing a new song on the ultra-influential KCRW.com that just floored me, and by about the third or fourth time I’d heard it I could tell this was not only one of my own favorite songs of the moment, but the same could be said for the on-air staff at KCRW, who famously “hand-pick” all their music. The haunting verse, rather than the chorus, has been running through my head off and on since the first time I heard it. KCRW rarely plays any song more than once a day, so when you start hearing the same song on multiple shows, it really stands out for those of us who listen consistently.

On August 1st I heard this song, called “One Red Thread” on KCRW.com again, and I finally bothered to find out about the artist. Were they from England, or Brooklyn, or Los Angeles, or Australia? A couple clicks into my search I discovered Blind Pilot was indeed from Portland, Oregon, and they actually had a show scheduled that evening in a basement lounge at Portland State University. I was stunned that the artists behind this song that had hypnotized me for weeks were playing a show within walking distance of me in only a few hours, with an admission cost of a whopping $5.

Normally when you hear of a concert by one of these KCRW “buzz” bands you better get tickets early, unless you live outside of LA and the buzz hasn’t quite spread to your area yet. It turns out that not many Portlanders listen to Santa Monica-based KCRW, because the crowd only swelled to about 60 people during the Blind Pilot set, and pretty much all of them except for me seemed to be the band’s friends, or perhaps part of a small PSU fan base.

My next surprise came when they launched into their set, and their very first song was their KCRW hit, One Red Thread. What kind of band starts with their hit? Evidently, a band that doesn’t even realize they have one. No one else in the crowd seemed phased at all, and their warmly received show peaked for their fans during their 8th and final song, in which nearly the entire audience already knew a clapping-along routine that sent the place into a frenzy. 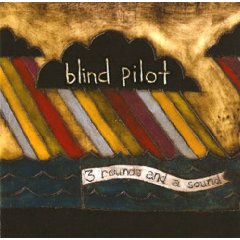 Blind Pilot’s recordings sound subtle and fairly low-fi, so it was a bit surprising to find a 9-piece group assembled on stage. When I bought a CD after the show off Ryan, the drummer, who is also half of the “official” duo at the core of the band, he told me they normally tour with only 4 members, but hometown shows also bring out a pair of violin players, a xylophone player, a keyboard player, and a trumpeter/keyboarder. They sounded excellent as a 9-piece, but their main line-up of the singer who plays acoustic guitar, stand-up bass, drums, and a female banjo player who harmonizes incredibly well with front man Israel, offers plenty of backbone so I wouldn’t hesitate to see the stripped-down version.

If you are wondering why being a KCRW “buzz” band is such a big deal, it’s because half the entertainment industry in Los Angeles listens to the station’s music programs regularly. The folks who pick the songs to appear on “Grey’s Anatomy” and “The Hills” either listen to KCRW most of the time, or they work there. In fact, nearly all the KCRW DJs are busy music supervisors for film, commercial, and TV projects, including Chris Douridas, who has played One Red Thread the most on his popular internet-only shows. (I know this because I used to work in the music biz in LA, and I’ve volunteered at KCRW pledge drives and also met and/or worked with most of these DJs.)

Blind Pilot is just about to embark on their second west coast tour, and again they’ll do it by bicycle. I believe I actually read part of a story about them a month or two earlier in a local paper without realizing who they were. They plan on riding from Bellingham, Washington all the way to Mexico, with perhaps a few dozen shows along the way. Ryan told me they’ll be heading to New York (on a plane) for shows after that, and I’m guessing this will be their last bike tour when their excellent new self-released CD, 3 Rounds and a Sound, really gets the momentum it deserves.

Check out the Blind Pilot Myspace page, which currently doesn’t even have One Red Thread among the choices. If things go the way I think they will, they’ll probably want to upload that one to Myspace, and also play it closer to the end of the set by the time they get to Los Angeles in October. Their tour dates can be found on the Blind Pilot official site, although only a few venues are listed as of now. I’d also bet the farm that in early October the band will be appearing live on Nic Harcourt’s ‘Morning Becomes Eclectic’ show, which runs from 9am to noon each weekday and is the station’s highest rated, even if the neither the band nor Nic realize it yet.

Here’s their new video of their song “Go on, say it,” which was the iTunes free download of the week in early July. It’s not nearly as catchy as One Red Thread, but it’s another of the really solid tunes on the album.