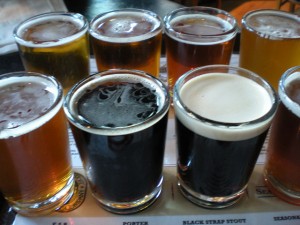 Portland is almost synonymous with beer, and if you didn’t already know that it’s probably because you’re not a beer drinker. But like Bavaria, Belgium or the Czech Republic, a trip to Portland isn’t complete without at least a taste of some of our fine brews.

The city of Portland has a long tradition of beer brewing, but it wasn’t until the 1980s when brewpubs began proliferating and prospering in the city. Some credit Portland with being the birthplace of the microbrew craze in the U.S. – microbrews being beers which are brewed on a very small scale – but whether or not that’s true, the fact remains that there are brewpubs all over Portland where you can sample and enjoy a wide variety of beers.

In fact, there are more than 25 breweries in Portland alone – more than any other city in the United States – and the noted beer enthusiast/journalist Michael Jackson (no, not that one) said Portland should be considered the beer capital of the world because there are more breweries here than even Cologne, Germany. Not bad.

If you’re into beer, you’ve got lots of choices in Portland – from the many McMenamin’s pubs around the Metro area (more than 30 at last count) to the small operations which only serve their beer in one place. Besides the McMenamin brothers, who not only make beer and wine but also reclaim and refurbish historic buildings all over the state to turn into brewpubs, movie theaters, and restaurants, some of the other large breweries with brewpubs in the city are Widmer Brothers, Deschutes and BridgePort. Some of the other pubs you might seek out – where you can sample the wares of the city’s smaller producers – are Alameda Brew Pub, Hair of the Dog Brewing Company, Laurelwood Public House & Brewery, The Lucky Lab, Amnesia Brewing, Tugboat Brewing and The New Old Lompoc.

In addition to the many public houses and restaurants serving local craft beers, Portland also has several movie theaters which are connected with some of the city’s breweries. This means you can enjoy a night out at the movies and a pint of your favorite microbrew, too. If this sounds appealing, try the Bagdad Theater, Clinton Street Theater, Laurelhurst Theater or Academy Theater. And as hot as the food cart scene is right now, Portland has it’s own food truck brewer — Captured By Porches Brewery, currently located at the D Street Noshery (at 32nd & Division St) cart pod.

And let’s just say that wandering from pub to pub isn’t your thing, that you’d rather stay in one place and have the city’s great brews come to you. Well, Portland has you covered with that, too, provided you visit during one of our fabulous beer festivals. In April there’s the Spring Beer & Wine Festival, the Holiday Ale Festival in December and the Portland International Beerfest in July. But for a really over-the-top beer experience, come in July for the Oregon Brewers Festival. It brings in breweries from all over the state and is the largest festival for independent craft brewers in North America.

For more about Portland’s breweries, see the Portland Beer site. And if you’re going beyond Portland’s city limits (or just interested in beer from other parts of the state), see the full list of Oregon breweries from Oregon Brewers Guild.