This is part of our series on Portland Neighborhoods. Click on that link to find more great neighborhoods around the city.

Portland is a city of incredibly distinct neighborhoods. Similar to Washington, D.C., the city’s streets are marked (and directions often given) in terms of the four corners – NE, NW, SE, SW – but neighborhoods within these larger areas can be quite different from each other. There are nearly a hundred different neighborhoods in Portland, and each has its own flavor. When I decided to make a neighborhood guide to Portland, I knew I would start with Eliot. Not only is it one of my favorite neighborhoods – it’s my neighborhood.

Eliot is a great place to eat, shop and live. Located in Northeast Portland, it may be one of the smallest and least well-known neighborhoods in all of Portland, but that second point is changing fast, especially among the foodie crowd. Some of the city’s best restaurants and coffee shops are here, and so that’s where I’ll start this article. 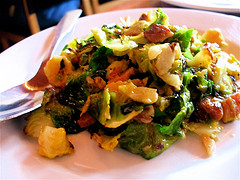 For its size, Eliot has a remarkably diverse set of restaurant options. The best of these, and indeed one of the best restaurants in all of Portland, is Toro Bravo. Offering a wide variety of tapas-style small plates, Toro Bravo was rated 27/30 by Zagat in 2009. The New York Times, Conde Nast Traveler and Gourmet Magazine are among the others raving about it, and if you come, you’ll see why. Expect a wait of at least 20 minutes to get in, even on a weeknight, and expect a bill of at least $20-$30 each if you get a drink. It’s not cheap, but it’s one of the most exciting menus you’ll ever see.

For those of us (myself included) for whom Toro Bravo is a bit hard on the wallet except on special occasions, there are plenty of other options. Eliot is home to some of the city’s best African food, including Ethiopian bar and restaurant The Queen of Sheba, and the newest restaurant in the area, Afrique. There is also a great Asian-inspired organic restaurant called Echo, as well as southern-style meat-plex Russell Street Barbeque. As I said, there’s plenty for everyone.

Aside from restaurants, there are also two of my favorite coffee shops in the city, Gold Rush Coffee Bar and Tiny’s. Both are on Martin Luther King Boulevard, and offer both coffee and food. The breakfast bagels with bacon or ham at Gold Rush are a great start to the day, and I’d give Tiny’s the slight edge on lunch sandwiches.

Of course, there’s more to do here than just eat. You’ll need a drink (preferably a Portland craft beer) to wash down that amazing food, and there are plenty of places to get it. The best is probably the Widmer Brothers Brewery, aka the Gasthaus, where you can the freshest Widmer brews as well as a full bar. For the more sophisticated palate, there’s a cocktail bar (Mint) and a wine bar (Alu). If what you want is more dive bar than wine bar, we have Billy Ray’s on MLK, voted best dive bar in Portland. Once you get to know Portland, you’ll know what an honor that is. The Wonder Ballroom is the neighborhood’s main live music venue, specializing in independent rock and pop bands from around the country and world.

Though Irving Park is close by in Irvington, the only real parks inside of Eliot are Lillis Albina City Park and Dawson Park on Williams Street. Dawson Park has a great playground and basketball court, but the thing you’ll notice immediately is the large gazebo. The cupola (top) of the gazebo was taken from a 120-year-old building elsewhere in Eliot and turned into one of the most recognizable structures in the neighborhood. A great place to bring kids during the day, especially when the weather is good.

You may notice from the map above that there is a large pink area in the middle of the neighborhood. That would be Emanuel Hospital. Taking up a huge chunk of the total area of Eliot, it is one of the city’s biggest hospitals, and the neighborhood’s one big employer. There is also a branch of the Multnomah County Library here, on Knott Street.

The must-see places in Eliot are pretty concentrated onto two streets, Martin Luther King Jr. Boulevard and Russell Street. Almost all of the businesses mentioned above are located on those two streets, and most fairly close to where the two intersect. That’s the best place to start exploring Eliot. Like most of the neighborhoods in Portland, it’s small enough that you can walk around it, but the 6 bus runs up and down MLK if you’re headed someplace on that street.

If you’re coming to Portland, I may be incredibly biased, but I highly recommend a visit to Eliot. It’s just one of several Portland neighborhoods that are really worth taking a day (or night) to explore.