Escape to Lisbon: mild climate during winter and spring 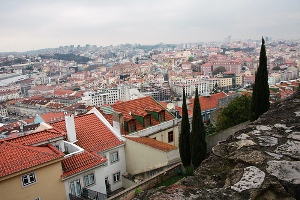 With yet another cup of hot coffee in my hands, I take a look outside my window. Winter. It’s about to snow and the temperatures dip below freezing. It’s not that I don’t like the changing of the seasons in a temperate climate, but it does get old. And the older we get, the more we would like to spend time in warmer climates. You’d think that you get used to the cold, but no, it’s exactly the opposite: we want to escape it.

And of course, it got me thinking about planning a vacation somewhere warmer and where it’s not peak travel season. Of course, that’s because of the budget. What would be a nice choice in the dead of winter? Lisbon, of course! It’s the westernmost European capital, blessed with a Mediterranean climate, strongly influenced by the Gulf Stream. So, winters in Lisbon are mild but rainy while springs are warm and nice. Sure, for the locals 46-59F is cold during winter but when you face below 30s, the Lisbon weather seems very nice.

Now to tackle the budget part…flights to Lisbon are not that hard to find even during the low season but if you fly from Portland, you’ll be making at least one stop along the way. In mid-February round trip airfare starts at $755 per person. Don’t plan too far in advance because you won’t be saving money. Actually, you’ll pay slightly more if you book now for mid-March.

When it comes to accommodation in any European capital one thing is for sure: regardless of when you travel, there is always a place available to sleep. While during the high season it’s advisable to book in advance, if you travel during winter or spring, you don’t need to worry that much. Hotels in Lisbon , like in any major city, range from affordable to very expensive, and the prices are not influenced that much by the season. But the discounts are easier to find during the low season, so you can stay in 3-star hotels for just €50 a night (in central Lisbon).

If that’s a bit too high for your budget, then hostels in Lisbon will surely be within your price range. A bed in dorms starts at €16 per night and you’ll be staying in the heart of Lisbon. Private rooms, in a similar location, start at €23 per person, per night.

When the winter weather is too much to bare and you feel like you need a change of scenery (and temperature), head to Lisbon. You might be unlucky to end up there during a cold front but as the spring is getting nearer the weather is getting nicer.