Getting from Portland to Astoria 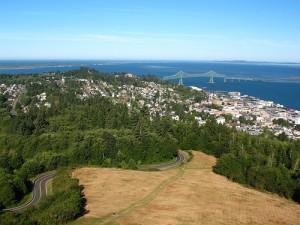 Portland is one of the greenest cities in the entire world. Dubbed the “City of Roses”, Portland is known for its scenic beauty , microbreweries and lively music scene. It’s also very close to gorgeous locations within Oregon state.

Astoria is a small town on the edge of the Columbia River and the Pacific Ocean. It is well known for being the terminus for the Lewis and Clark Expedition, the first transcontinental expedition to the Pacific Coast by the United States.

The closest airport to Astoria is Portland International Airport (PDX), the largest airport in the State. It handles flights from Europe, Asia, other countries in North America, as well as domestic flights.

You can only travel by land between Portland and Astoria. If you don’t fancy driving a rental car, then catch the bus. The travel time is about 2 ½ h and the fare is $18* one way.

Buses from Portland to Astoria

Driving from Portland to Astoria

You can rent a car in Portland and drive the 98 miles to Astoria. The travel time is about 2h 10 min. Take Interstate 30 from Portland via Longview. A longer route goes via Interstate 26.

Note: * at the time the article was written