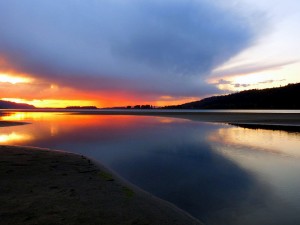 You might not associate the Portland area with nude beaches, but there are two clothing-optional beaches in the Portland metro area. The summer sunbathing season is short, and Oregonian skin might be abnormally pale, but that doesn’t stop Portlanders from baring it all on these beaches. To strip off (legally) in public, you’ll need to get yourself to one of these two nude beaches in Portland.

This sandy beach on Sauvie Island, north of downtown Portland, runs along the Columbia River and is partly clothing optional. It’s a very popular beach with all age groups, and it’s not unusual for the beaches to be packed during the heat of summer. In addition to the stretches of sandy beach, there are also volleyball courts toward the south end of the beach. Not everyone goes without a swimsuit. Collins Beach is regularly patrolled by the Columbia County Sheriff’s department. For directions to Collins Beach, check the map below or Oregon Clothing-Optional Beach Alliance’s page.

This Oregon state park was actually the first official clothing-optional beach in the entire country, and lies along the Columbia River east of downtown Portland. The nude beach itself is secluded from the rest of the park, so there’s privacy for everyone. Rooster Rock isn’t as popular these days as Collins Beach, but local naturists are working to reclaim the clothing-optional beach here. For directions to Rooster Rock, check the map below or ORCOBA’s listing. The official state park website for Rooster Rock is here and includes hours and admission fees.

View Nude Beaches in Portland in a larger map

For more information about the Oregon Clothing-Optional Beach Alliance, check out their website. And if you visit one of Portland’s nude beaches, just don’t forget your sunglasses – even if the sun isn’t bright enough to blind you, our abnormally pale skin will be.

Have you been to one of Portland’s nude beaches?