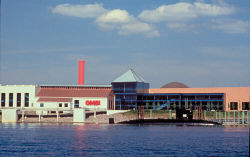 The Oregon Museum of Science and Industry, most often called by its acronym OMSI, is a fun and educational museum located on the East bank of the Willamette River just across from downtown Portland. It’s well known for its many permanent hands-on exhibits dealing with all sorts of topics concerning science and technology, and the museum features several temporary exhibits every year. OMSI also houses a planetarium, the only OMNIMAX theater in Portland, and a submarine which is docked off a pier outside the museum and is open to visitors.

Established in 1944, OMSI has been a major fixture in Portland since the 1950s. The museum has been forced to move twice because it had outgrown its previous locations. Its current river-side building was opened in 1992 and allows for future expansion room as well. Sadly for the countless schoolkids who remember the giant walk-through heart at OMSI’s previous location, the heart didn’t make the move to the current space. Ah, well – at least we’ve got the memories.

Some of the permanent exhibits at OMSI include:

OMSI also features several theater spaces, including Portland’s only OMNIMAX theater, which show a variety of programs that are all at least vaguely science-oriented. The Kendall Planetarium is all about space, whereas the topics of the films on the OMNIMAX screen cover a wide range of topics. What’s playing changes periodically, but there are usually at least two films in the OMNIMAX theater at any given time. And if you want to go really retro, check out one of the laser shows in the Planetarium – including some classic Laser Floyd. C’mon, you know you want to go.

OMSI really is fun for kids of all ages, no matter how much you like science!

Hours: General museum hours are Tuesday-Sunday, 09:00-17:00 (closed Mondays); showtimes for the theaters will vary, and special exhibits may have different hours. Check this page for updated information.

Admission: Museum admission – $9 adults (age 14-62), $7 youth (age 3-13) and senior (63+)
Tickets for the theaters, USS Blueback tour and for any special exhibits are purchased separately and are not included in the museum admission (unless you purchase a “Museum Combo” ticket).
Museum admission is not required to visit the separate attractions, such as the theaters.