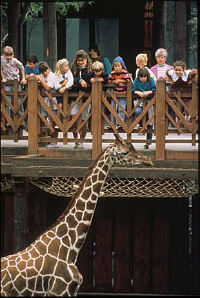 While nearly every big city has a zoo, not every zoo is a place you’d want to actually visit. The Oregon Zoo, located in NW Portland‘s Washington Park, is one of the zoos that is fun to visit and has attractions and exhibits that’ll appeal to all age groups. It covers 64 acres and is the biggest paid attraction in the entire state.

First opened in 1887, the Oregon Zoo is the oldest zoo in North America that’s west of the Mississippi River. It has a history of creating more natural environments for the animals in its care, and most of the animals aren’t behind bars or in cages. In fact, the first bear exhibit was in the form of a pit without bars, perhaps the first of its kind anywhere. These days, the zoo is probably most famous for its elephants and elephant breeding program, although it has exhibits and animals from all over the world.

The exhibits included at the Oregon Zoo are:

Of particular note are the Asian Elephants and the Great Northwest exhibits. The former is best known for its breeding program, which in 1962 produced the first elephant born in the Western Hemisphere in 44 years. That elephant, called “Packy,” is something of a local celebrity and is at the moment the largest Asian elephant in the country. Since Packy’s birth, there have been nearly 30 more elephants born at the Oregon Zoo – it’s the most successful elephant breeding program on earth. The elephant exhibit includes a museum as well as a huge pool which can fit up to ten elephants at a time.

The Great Northwest exhibit is noteworthy because it’s a good representation of the wildlife that’s found throughout the greater Pacific Northwest region. You’ll find several different kinds of natural settings represented, including a mountain stream, a Pacific Ocean cove and a Cascade mountain area. 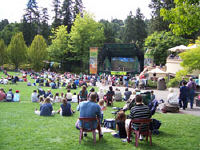 During the summer, the Oregon Zoo hosts a series of live music events for which you can bring a blanket and picnic on the expansive lawn in front of the open-air stage. In December, the ZooLights show is a fun display of holiday lights with animal themes. At Halloween there is a trick-or-treat event. No matter when you’re visiting, there’s probably an event going on at the Oregon Zoo – so check the zoo’s calendar if you’re interested. Oh, and don’t forget about the Washington Park and Zoo Railway – it’s fun for everyone, but you can pretend you’re doing it for the kids if you want. We won’t tell.

Getting There & Parking: The zoo is located five minutes west of downtown Portland on Highway 26. Watch for the signs. The zoo is the first exit from this highway.
$1 per vehicle – 960 spaces, 17 disabled parking spaces
There’s a shuttle which runs from the next freeway exit on busy days.
Alternately, the zoo is also on the MAX Light Rail line – just get off at the Washington Park station.