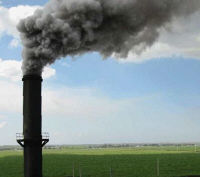 Oregon’s Department of Environmental Quality (DEQ) issued a pollution advisory today due to the lack of air movement we’ve had in the Willamette Valley recently. The weather’s been beautiful, and the lack of wind means that the pretty autumn leaves have stayed a little longer on the trees, but it also means that the pollution we’re all creating hasn’t had a chance to get circulated out. And with the extended forecast showing more of the same weather we’ve been having, it’s likely that the polluted air will still be hovering over Portland at least through the weekend.

In the pollution advisory for Portland, DEQ suggests that young children and older adults limit their outdoor activities, which may cramp the style of trick-or-treaters who’ll be out and about tomorrow night. DEQ recommends that especially during the early morning and later in the evening, younger and older people and those suffering from lung or heart diseases should be careful about spending too much time outdoors. These times of day are when air quality is at its worst. In addition to suggesting caution for people spending time outside, DEQ also asked that people not start any outdoor burns, use wood stoves or fireplaces if they can avoid doing so, and limit driving by doing things like taking Portland public transportation.

Parents are advised that their young trick-or-treaters “should try not to over-exert themselves” – which would be good advice, except that these are kids who are going to be eating vast quantities of sugar tomorrow night. Who thinks they can get a six-year-old hopped up on sugar to sit still for ten minutes?

Good luck out there, people, and try not to breathe too deeply.