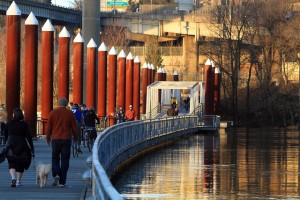 It used to be that people wanting a scenic and safe place to run, walk or bike along the Willamette River were limited to Waterfront Park on the west side of the river. In 2001, however, that changed with the dedication of the Eastbank Esplanade along the eastern side of the Willamette.

The Eastbank Esplanade stretches for 1.5 miles from the Hawthorne to the Steel Bridge, and includes some parts which are anchored to the ground and some parts which are floating on the river itself. It not only runs alongside the Willamette but also connects to the neighborhoods attached to it as well, making it accessible for residents of those neighborhoods as well as others. Since it opened it has become a popular place to walk or jog on the east side of the river.

In addition to the wide pathway that makes up most of the Esplanade, there are also several pieces of public art which were worked into the design. These include the “Echo Gate,” which is meant to remind us of the era of the Shanghai tunnels, and the “Stackstalk,” which suspends a Japanese glass fishing float as part of the design. The floating walkway which connects two land-based pieces of the Esplanade is 1,200 feet long, making it the longest floating walkway in the United States.