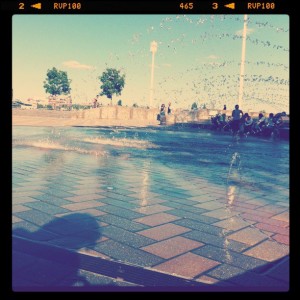 August is typically Portland’s hottest month. With summer in full swing, it’s one of the city’s busiest times for visitors, and while hotels might be trickier to find this month, seeing the city at it’s sunniest is totally worth an August visit.

Temperatures in August are usually in the high 70s, with average highs in the low 80s, and lows in the mid 50s. The Pacific Northwest’s long days are still in your favor during August, with about 14 hours of daylight to explore the city.

>> Learn more about: weather in Portland

July 29- August 7: PDX Bridge Festival – Celebrate Portland’s bridges with a week full of bridge-y events. The grand finale is Brunch on the Bridge when the Hawthorne Bridge turns into a grassy picnic area on Saturday, August 6.

August 2: Portland Night Out – The 28th annual National Night Out event is hitting Portland with over 150 neighborhood block parties. Check the full list to see what’s happening in your area.

August 14: Portland Bridge Pedal – your chance to pedal across 10 of Portland’s bridges.

August 19-21: Portland Riverfest along the Willamette River. This year’s festivities include Portland Triathlon, Concert in the Park at South Waterfront, Riverfair at Waterfront Park, kayak tours, and the SOLV cleanup.

August 19-28: Portland Beer Week Celebrate the city with the most breweries with our inaugural PDX Beer Week (yep, that’s 10 days in a week).

Summer in Portland is the prime time to be outside, and weekends in August are perfect for day trips to Cannon Beach, chilling at a local Portland brewery, or experiencing a summer concert, and shopping at area farmer’s markets. Another ongoing event in August is Movies in the Park, at neighborhood parks all around Portland.

If you’re looking for a break from the sun, you might consider hiding out in Powell’s Books or checking out the latest exhibits at OMSI. Wading in the many fountains around town is also a great option, especially if you have kids in tow.

What’s your favorite thing to do in August?