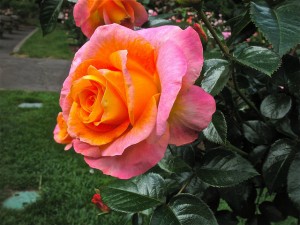 Portland is known as the Rose City for a reason – the climate is ideal for cultivating roses. As if to prove this, the city is home to the International Rose Test Garden which is part of Washington Park. It’s the “oldest continuously operating public rose test garden in the United States” (so says Wikipedia), and has been in operation since 1917. All told, the garden features more than 6,800 rose bushes representing nearly 560 varieties of roses.

Another small garden within the International Rose Test Garden, one which has special significance to Portlanders, is the Royal Rosarian Garden. It was designed to pay tribute to the group of Portland residents who make up the Royal Rosarian group, the “official greeters and goodwill ambassadors for the city of Portland.” The garden contains the “namesake” roses of past “Prime Ministers” of the Royal Rosarians – the roses which they chose as their personal favorites.

Even before the International Rose Test Garden was started, however, Portland’s place in the world of roses had already been sealed. The Portland Rose Society was founded in 1889, and the city has been the setting for many important events in the history of rose cultivation. Since 1919 the city of Portland has issued annual “Gold Medal Awards” to the best new rose variety, and since 1940 the International Rose Test Garden has been an official testing site for the All-America Rose Selection. In 1996 another award coming from Portland was established – it’s called “Portland’s Best Rose” and is a one-day judging event which takes place each June. Portland is the only city in North America to give out awards like this for roses.

In addition to just being an excellent place to enjoy a beautiful day surrounded by beautiful roses, the International Rose Test Garden is also home to several events. There is a small amphitheater on the grounds, and during the summer you may find classical music concerts being held outdoors there. Summer is also when you’re likely to find weddings taking place, or at least wedding portraits.

Hours: Daily, 07:30-21:00
Admission: Free
Tours: Free tours available, Tuesdays at 10:00 and 13:00, Saturdays and Sundays at 13:00. Meeting point is the sign outside the Rose Garden Store. Donations welcome.
How to Get There: See the directions and map here
More Information: Portland Parks website on the International Rose Test Garden is here
Rose Garden Store website