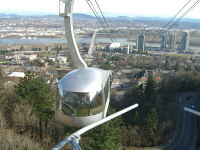 Portland has long been recognized for its efforts in innovative public transportation, and the newest transit method is just another feather in the city’s cap. Well, kind of. Now that it’s finished, the Portland Aerial Tram is actually quite a striking addition to the skyline of the emerging South Waterfront district. During its construction, however, there were plenty of controversies along the way.

The Portland Aerial Tram, sometimes called the OHSU Tram or just simply the Tram, connects Oregon Health & Science University (OHSU) on the hill with the South Waterfront neighborhood below. OHSU has expanded into the South Waterfront area, so most of the people using the tram on a regular basis are those who work, go to school or get treatment at the hospital complex. But even people who have no reason to ride the tram have found excuses to make the round-trip journey – the views from the car are spectacular.

The distance the tram covers is roughly 3,300 feet (about one kilometer), and the trip takes about three minutes to complete. Each car can carry up to 78 passengers, and a car leaves each station every five minutes. The tram’s lower terminal at South Waterfront connects with the Portland Streetcar, which provides easy access to downtown Portland. In addition to ferrying people up and down the hill in a new and interesting way, the Portland Aerial Tram is also innovative in environmental ways – for instance, the car which is traveling down is generating energy which is used to propel the car which is traveling up.

Passengers on the tram report that during periods of high winds, the cars have a tendency to rock back and forth more than they ordinarily might, but so far that’s just been a cause of delight – especially to younger riders who think it’s like an amusement park ride. Both the tram system and the cars themselves were designed by Swiss firms and actually meet much higher seismic standards than are currently present in the United States.

As is the case with many construction projects, the construction of the tram was mired in controversy long before it was complete, largely because of cost overruns and the unhappiness of the people whose houses are now located right underneath the tram’s route.

Tickets: $4 roundtrip (children 6 and under ride for free)