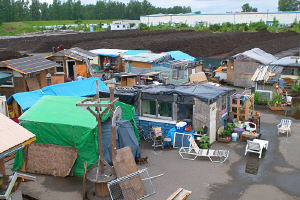 Portland may not have as large a homeless population as some other cities, but there is most certainly a homeless community in Portland. In a somewhat controversial move in late 2000, a small group of homeless people and activists claimed some unused land in downtown Portland as their own. They renamed it Dignity Village, and it did more than give its residents a place to call home – it has also given them a political voice.

The original site for Dignity Village was in downtown Portland, but residents were under constant pressure to move because they weren’t licensed to use the land they were on. Eventually, through the efforts of homeless activists and some local politicians who sided with the Dignity Village residents, the group was relocated to its current location and recognized as a legitimate community. The current site is some seven miles from downtown in an area of NE Portland called Sunderland, and although a location so far from downtown was initially something the Dignity Village residents fought against, in time they accepted it as a compromise.

Dignity Village was moved to the Sunderland location in the summer of 2001 and the community’s existence has been guaranteed by the Portland City Council through 2010. The space has been designated as a campground by the city, and is therefore exempt from most building codes. There are some community facilities available on the site which the residents share, such as showers, gardens, cooking facilities and even some internet access. Dignity Village has also been incorporated as a non-profit organization in Oregon and has elected officers from among the residents.

There are community rules at Dignity Village, although they are pretty basic – they are:

Even with these rules, however, children are not allowed to live in Dignity Village. This is mainly because prior criminal convictions (including for sex crimes) do not preclude someone from becoming a resident, so the atmosphere cannot be guaranteed to be safe for children. Also, the site is often in a state of construction, which isn’t generally safe for kids, either.

Dignity Village has a website where you can learn more about the community, including how to donate, which is here.