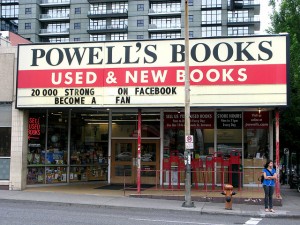 If you never visit Portland without an empty suitcase in which to carry books home, know that you’re not alone. Powell’s Books is such a popular stop on many trips to Portland that some people will save their book-buying lists for months anticipating the shopping adventure. The main store, Powell’s City of Books, is the largest independent new and used bookshop on earth. It’s so big, in fact, that the store map is not just handy, it’s a necessity.

Powell’s can be intimidating to the newcomer, and confusing as well. Unlike most new/used booksellers, Powell’s actually shelves both new and used books together. This means that if you find that the book you want is in stock, you won’t necessarily be guaranteed that it’s a new copy. If you find a used copy, however, you’re likely to score a great deal on a book that’s been at least given a once-over to make sure it’s not damaged. Powell’s buys used books every day, so the stock is always changing. True book lovers can – and often do – spend entire days wandering the store’s shelves.

Founded in 1971, Powell’s has been a Portland icon nearly ever since. Walter Powell began Powell’s Books and his son, Michael, left his own bookstore in Chicago to help Walter run the business. Under their leadership, the store grew from one location to the six stores in the Portland Metro area which exist today. The largest is the headquarters, Powell’s City of Books, which takes up an entire city block between W Burnside and NW Couch Streets and NW 10th and 11th Avenues. The gigantic store has over 68,000 square feet of floor space on four floors.

The next largest store is actually in the Portland suburb of Beaverton, in the Cedar Hills Crossing shopping center. It’s more than 32,000 square feet, and claims to have the largest children’s book section of any bookstore on the West Coast. (There’s more than just children’s books there, too.) There is a Powell’s location at the Portland Airport, with new and used books to keep you entertained on your flight, and a Powell’s on SE Hawthorne. In addition to all these general bookstores there are also a couple of specialty stores – a technical bookstore near the City of Books on the North Park Blocks, and a cooking/gardening store on Hawthorne near the other Hawthorne store.

For those who just can’t wait for the next trip to Portland, you’ll be pleased to know that Powell’s has a great online presence. In fact, the company launched their online book sales website in 1994 – that’s before Amazon, people.

Powell’s is a Portland landmark, and is so beloved by locals that if you’re visiting friends in Portland they’re just as likely to drag you to the book shop as you are to drag them.

“Tour” of the City of Books: https://www.powellsbooks.com/info/citytour.html