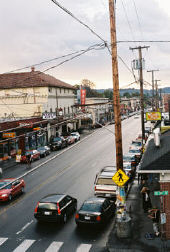 Southeast Portland generally covers the area from the Willamette River out to Gresham (which is technically a suburb but when you’ll enter without realizing you’ve left Portland’s city limits), and from Burnside Street south to the Sellwood neighborhood. It’s a huge area, but most of it is residential – so the places where visitors will be spending time is much easier to get your head around. Some of the smaller neighborhoods within SE which are of interest to visitors are listed below.

The Hawthorne and Belmont districts, centered around Hawthorne Blvd. and Belmont St. respectively, are some of the busier areas in SE Portland. Hawthorne has more of a history as the hippie center of Portland, with fun and funky shops and restaurants running up and down both sides of the street, but Belmont has been redeveloped in the last several years making it also a popular place to go shopping or find nice restaurants. Many of the areas around these two major streets were once popular for those with blue-collar incomes, but housing prices have skyrocketed in this area in recent years, pushing many lower income families into other neighborhoods.

Sellwood, which was once a town of its own, was annexed by the city of Portland and is now a charming neighborhood. It’s full of antique shops, and has some excellent restaurants as well. It can be challenging to find parking, so take the bus if you can; once you get there, it’s a pleasure to walk around and poke your nose in the cute shops. Southeast Portland is home to one of the city’s more popular parks – Mount Tabor Park. It’s a dormant volcano, and is a great place to go for bike rides and walks.

You may also find small collections of shops and restaurants on parts of Division Street, Clinton Street and 82nd Avenue. The latter is really hit or miss, as it was once one of those areas of the city that even residents weren’t eager to visit. It’s still too littered with used car dealerships to make it really a destination worth going out of your way for, but it’s also a great place to find lots of ethnic markets – particularly Asian.