Trip to Vegas, anyone? 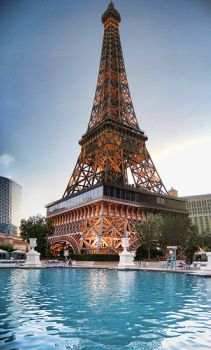 It’s almost a month ago now that I wrote about dreaming of a warm weather escape from the rain in Portland, and that dreaming hasn’t stopped. It won’t until I either get out of the cold, or the cold finally disappears – which, as Portlanders know, won’t likely be until April.

The thing is, I tend to like Portland winters most of the time – rain shovels itself, everything stays wonderfully green, and it never gets too cold – but there are those days when I can’t get warm and all I want is to get out. And while I’ll confess that I’ve been dreaming recently of more exotic locations (did you see those cheap flights to Spain last week?), it’s more realistic for me to be thinking about a few days in Las Vegas instead.

I’ve never been the biggest fan of Las Vegas, but the more time I spend there in recent years the more I appreciate what it has to offer. There’s the stereotpyical Las Vegas that everyone thinks of first, but there’s so much more to do and see in Sin City than just the stuff that gives it that nickname.

Personally, one of the things that I always get excited about is dining out in Las Vegas. I’m not talking about the famous buffets, either. I love good food, and I love trying out well-known restaurants – so when world class chefs like The French Laundry’s Thomas Keller and Babbo’s Mario Batali open restaurants in Vegas, those are the ones on my list. I’m willing to pay more for meals in places like that, partly because I’m not a gambler and am therefore not dropping cash in the casinos, but also partly because when you can get cheap tickets to Las Vegas (like you often can from Portland) I’ve got some money to spare.

One thing I’ve never done on my short trips to Las Vegas, but that I’d really like to do on a future visit, is get out of the city and explore some of the hiking areas. When you fly into Vegas you can see quite clearly how quickly one can get out of the city proper and into the mountains, so it’s easy to understand why so many outdoorsy types live in such a neon-covered place.

And that’s not to say anything negative about those neon-encrusted fancy hotels on the Strip, either – they’re fun to look at, usually have good restaurants and shops, and the rooms are often lovely. I’m just not willing to pay their hefty pricetags – especially when the off-Strip Vegas hotels are nice enough, and when I’m planning to spend time outside where it’s warm anyway.

What about you? Where are you dreaming of escapting Portland’s cold, wet winter?