Something visitors notice almost immediately when arriving in Portland is how bike-friendly the city is. And although we came in second to Minneapolis in Bicycling magazine’s latest Top Bike-Friendly Cities survey, Portland can definitely claim the title of the most bike-friendly beer town in America or at least the city having the most bike fun.

If you’re in Portland in late June, you’ll happen upon 2+ weeks of bike mania deemed “Pedalpalooza” where you’ll find rides from the tame – Food Cart Lovers Ride, to the not-so-tame (really is anything unusual in this city?) – World Naked Bike Ride. With 257 bike rides and events scheduled for this year’s Pedalpalooza, there’s something for everyone — provided you’re a fan of bicycles, including the Mr Mom ride, Joy of Sax ride, Acro Yoga ride, Cargo Bike race, Tandem ride, and even a Mixte Mashup ride. 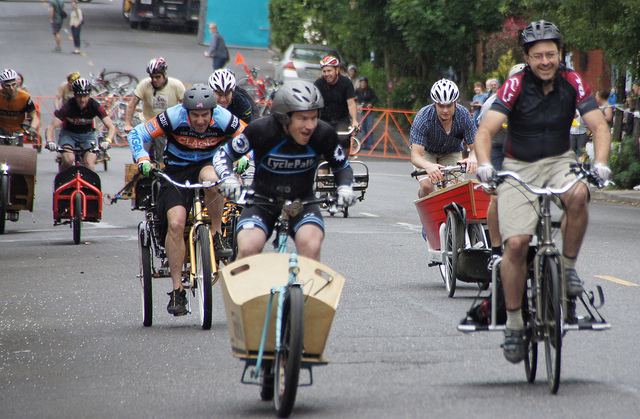 Bikes Fly Free
If you’re flying out of PDX between June 9-26, 2011 bikes fly free on both Southwest and Alaska Airlines in celebration of Pedalpalooza. Since most visitors to Portland don’t bring their own bike, there are some hotels in downtown Portland that offer free bike rentals to guests, including Ace Hotel and Hotel Monaco. You can always rent a bike at one of Portland’s many bike shops as well.

Portland by Bike
Portland is a fairly easy city to see without a car. Most of your exploring can be done on foot, via public transportation of the MAX, streetcar, and bus, or getting around by bike. Although if you plan to visit Mt Hood, the coast or the Columbia River Gorge you’ll need to rent a car or Zipcar for the day.

Have you seen Pedalpalooza?