Where to Watch the World Cup in Portland 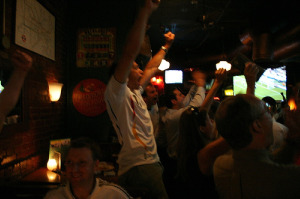 Portland has the well-deserved nickname of “Soccer City USA.” Going to PGE Park to watch the Timbers play is great, and will be even better next year when they’re in the MLS, but if you didn’t make it to South Africa to see this year’s World Cup in person you’re stuck watching the games on TV.

Watching from the comfort of your living room is convenient, but if you’d like to enjoy the camaraderie of watching the World Cup with other soccer fans in Portland, here are some of the best places in Portland where you can watch the 2010 World Cup.

For more suggestions on places to watch the World Cup in Portland, check the spots listed on the Portland Soccer Bars website – these are places that are known for showing soccer games throughout the regular season, but check their websites to confirm their World Cup schedules.