Get a Jump on Summer in Miami 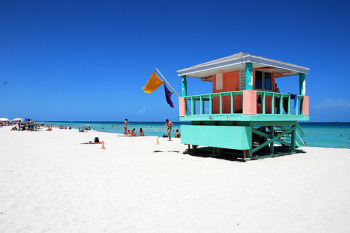 Spring is, well, springing in Portland these days – every tree is spouting tiny new leaves, flowers are bursting into bloom, and allergy sufferers are going through boxes of tissues like there’s no tomorrow. With the recent spate of glorious weather we’ve had, you might be surprised to know that on some of the days that saw more than half the city out in short shorts and flip-flops the mercury barely hit 65°. Around here, you’ve gotta take advantage of even a hint of nice weather.

But even though we know summer’s right around the corner, that doesn’t mean a trip to somewhere truly warm and summery doesn’t sound like a great idea right now. Why not remind your Pacific Northwestern pasty white skin what sun feels like before you expose it to all your neighbors?

If you’re in the market for a little summer preamble, let us recommend a trip to Miami. The past winter in Florida was much colder than usual, which turned plenty of wintertime escapes into disappointments for people, but it’s perfectly warm in Miami now – low- to mid-80s for the forseeable future – and after a slow winter tourist season there are more travel deals to Miami to be had, as well.

Miami isn’t usually known as a cheap destination, what with the whole South Beach thing, but even during the high season there are what could be considered cheap hotels in Miami that you could stay in. They’re typically basic hotels nowhere near the center of the action, but they’ll usually do. This year, before you settle for a hotel that’s out of the way and just “acceptable,” look around a bit more – you’re apt to find great rates on hotels you might not have dreamed of staying in before, partly because of the bad weather over the winter. It’s like getting a free(ish) upgrade.

And while you parents out there might be holding out until your kids are out of school before you hit the road this summer, you might still want to look at some of the Miami deals now. In some cases, the deals could stretch into the early part of the summer when you’re ready to travel. Just because the kids are clamoring to see “the mouse” doesn’t mean you can’t combine a trip to Disney with family travel in Miami – kids like beaches, too.