Getting from Portland to Seattle (and return) 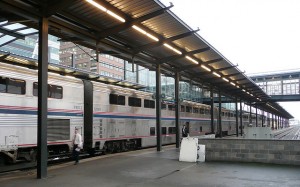 Seattle is like Portland’s grown up big sister, and a must on any Northwest itinerary. Famous for its space needle, 90s grunge rock, Pike Place market, Microsoft, and the home of Starbucks, Seattle is a great city to get the Northwest big city experience. Although the best way to visit the downtown area is on foot, the surrounding areas are quite spread out and easier to visit by car, so you might want to make it a Seattle road trip. Here are your options to get from Portland to Seattle and vice versa.

Seattle’s International airport (SEA), most often referred to as Sea-Tac is about 14 miles from downtown. The flight from Portland takes about 45 minutes and is served by Alaska Airlines, United, Continental, and SeaPort Airlines (who fly into Boeing Field instead of Sea-Tac). Depending on when you buy your ticket, you can fly roundtrip for as low as $140 per person.

The Amtrak Cascade line that runs up and down the west coast departs Portland four times per day, between about 8am and 6pm. The southbound Cascade line from Seattle to Portland runs between 7am and 6pm. One-way coach fare is priced from about $31, depending on your departure time and day of travel.

The schedule and prices for the Amtrak Cascade line are fairly consistent, although not always on time. The Cascade line also has wifi. The train arrives in Seattle at King Street Station right in downtown — which also happens to be right near the Washington State ferry docks (serving Bainbridge Island, Bremerton, Vashon Island, and West Seattle). If you are continuing your journey, the Amtrak Cascades line extends all the way to Vancouver, BC. See the map below for the Amtrak station locations in Portland and Seattle.

Bus service between Portland and Seattle is run by Greyhound and Amtrak. They depart from the Greyhound station at Amtrak’s Union Station in Portland. The route takes about four hours, with stops being made in several places along the I5 corridor. Prices range from $28-45, so it’s definitely worth comparing the schedule and prices with the train.

View Portland to Seattle in a larger map

Yes, really! Ok, so it’s only once a year, but every July, thousands of Northwest cyclists participate in the 200 mile Seattle to Portland Bicycle Classic.