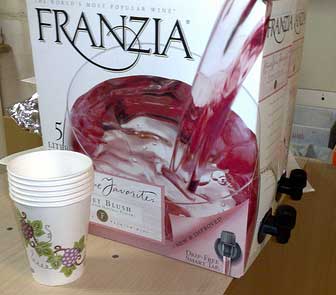 Clearly responding to the effects of a down economy, the State of Oregon announced yesterday that it was changing its tourism strategy in an attempt to attract more of a “down-scale” traveler. The centerpiece of the new ad campaign, which officially begins April 1, 2009, is their new slogan: “California is for snobs – Oregon Box Wine Country is for you!”

The state’s famously fertile Willamette Valley region is known mostly for its fine pinot noir red wines, but after the current autumn harvest the plan is for heavy tax incentives to shift production toward cheaper and more durable grapes that will grow in any climate, and are the main ingredient in most box wines around the world.

State tourism spokesman Zamunda Nall said yesterday in a statement, “Napa Valley is too powerful to compete with in this down economy, so we’ve made the natural decision to target wine tourists of slightly lower social-economic status. Wal-Mart sales figures show that box wines have a strong and durable following, and fans of the large and easy-to-stack vessels have been ignored by the tourism industry for far too long.”

Sensitive to the budget constraints of many box-wine guzzlers, the state is launching a program whereby most of the roadside motels throughout the region will offer special rates to those who’ve come to tour the area’s box wineries. Rates as low as $39 per night will be offered with the packages, and those who prefer camping instead will be allowed to set their equipment up in these same motel parking lots, with rates starting at $19 per carload.

Since box wines tend to be produced in large and sterile factories, the “wine tour” experience has been modified to fit the new breed of traveler. Instead of an informative tour of the vineyards followed by the driest-to-sweetest tasting ritual, box wine tours will consist of a theme-park-style ride where the barely-mobile box wine fans will be loaded into horse carts that run on guide rails. Visitors will be scooted past the impressive stainless steel vats where the wine is blended, followed by a walk past an open 55-gallon drum, where each guest is invited to fill his or her own Styrofoam container with wine on the way out to their cars.

In one final accommodation for the new box wine visitors, the state highway patrol will raise the legal blood alcohol level from .08% to .1% on weekdays, and a stunning .15% on weekends while the promotion goes on.