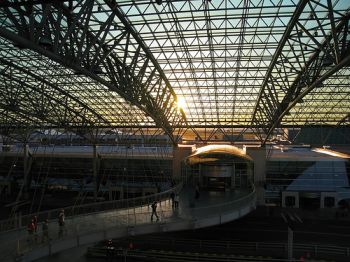 Although Portland isn’t home to a major airport on the scale of San Francisco, Chicago, or New York, PDX is big enough to get Portlanders where we need to go. Which is a good thing, because we like to travel.

What can sometimes be a challenge, however, is finding flight deals from Portland – all too often the best and most frequent sales are on flights departing from the bigger airports in the US, like New York’s trio of airports, or Atlanta, or even Los Angeles. And if you, like me, are more interested in visiting Europe than Hawaii or Mexico, then those steep discounts on flights from Portland are even fewer and farther between.

Which is one of the many reasons I’m so excited about a new introduction at BootsnAll, the “flights from” section of our travel deals page. It works for lots of departure points, but the one I’ll be bookmarking (and the one other Portlanders who love to travel should also be bookmarking) is the “deals from Portland” page. The top of this page looks like all our travel deals pages, but when you scroll down you’ll see a column of “Cheap Flights from Portland” and “Cheap Portland Vacation Packages” – both of which are deals on flights or package trips that depart from PDX to points all over the globe.

Of course, most of the best deals from PDX are still going to be cities relatively nearby – other cities on the West Coast, Las Vegas, Hawaii, Mexico – but it’s still an up-to-the-minute selection of great deals on flights and trips for anyone who calls PDX their home airport.

As I’m writing this, I see deals from Portland to Reno from $183 round-trip, Portland to Long Beach from $199 round-trip, and a package trip to Orlando including round-trip airfare and two nights at a hotel from $527. Those may not be places you’re contemplating visiting right now, but keep an eye on this page and see what deals crop up that do inspire you to book a ticket and get out there.

Side tip for the geeky types out there: You don’t even have to bookmark the page to get all the deals. You can add it to your RSS reader so you don’t miss a thing.

Bonus side tip for the uber-planners out there: Skip those monotonous circles of the airport parking lot by booking Portland airport parking before you even pack a bag, thereby making your trip to the terminal even faster and more efficient.